This week I’ve been working with 7th grade students who have been identified as having the potential to fail the state standardized math test if they don’t receive some extra practice.

I have been a proponent of using Problem Based Learning (PrBL) in math classes since I saw an overview of it at a New Tech Network Annual Conference by Geoff Krall (@emergentmath ).

I am also a firm believer that PBL (and PrBL) is great for ALL students. Well it was time to put up or shut up this week.  As they came in on Wednesday morning I presented them with this problem: “Your company wants to sell individual koozies for soda cans and wants to determine the smallest size box they would need to fit a koozie that is 1/4 inch larger than a standard soda can.”  I also had a can of Diet Dr. Pepper on the table.

Our next steps were to do our Knows and Need to Knows.  Some of their knows included the obvious but there was also the fact that we needed to use the volume formula for a cylinder. Rather than telling them that this wouldn’t be needed I had them wait and actually calculate it and solve the final answer and then go back and see if we really needed it. If one of the students had questioned it right away I would have led them to the fact that it wasn’t needed at that point. 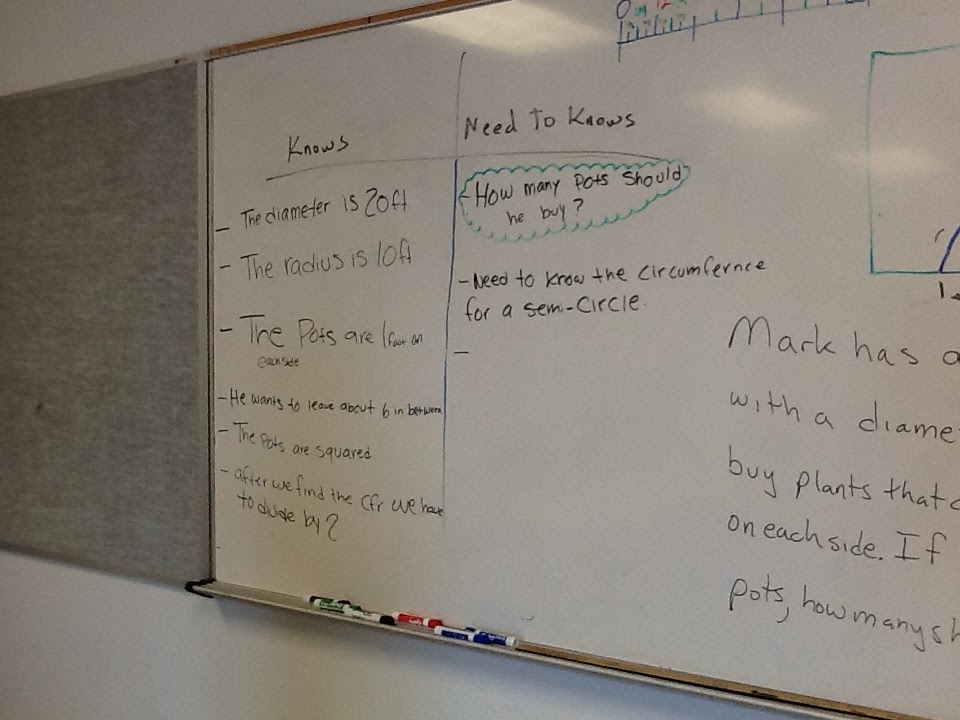 This went well and the students were incredibly engaged so I attempted another problem the next day.  In this problem there was a man with a patio that was in the shape of a semi-circle and he wanted to put planters along the edge (see the first photo above).  The planters were 1 foot square and he wanted them to be 6 inches apart. I gave them a drawing of the situation and they came up with the word “semi-circle” in their “knows” section.

This went even better and I allowed them 5 minutes to attempt to answer the problem. I stopped them right at 5 minutes and we explored their different approaches.  Most had created tables of lengths and number of pots. So, I took the opportunity (after we had solved the original problem) to show them how they could create an equation from the table of data (looking at the deltas between each X and each Y). And I showed them how you could solve that equation to get the same number of planters that we had gotten with the table of data.

These were two simple problems at the basic level. By presenting the information in this manner, I forced them to think more deeply about the situation. In the first problem, for example, I could have asked for the size of a box that would be needed for a can with a 2.5 inch diameter and 5.5 inches in height. But why would they even want to answer that?

Giving students a chance to solve problems like this and using the knows/need-to-knows process really gets students thinking rather than manipulating numbers. Give it a try.  Take a problem that is on a homework or is one you want to use as an example in class and remove some of the information so that it becomes a “real” problem. Then watch your students learn.