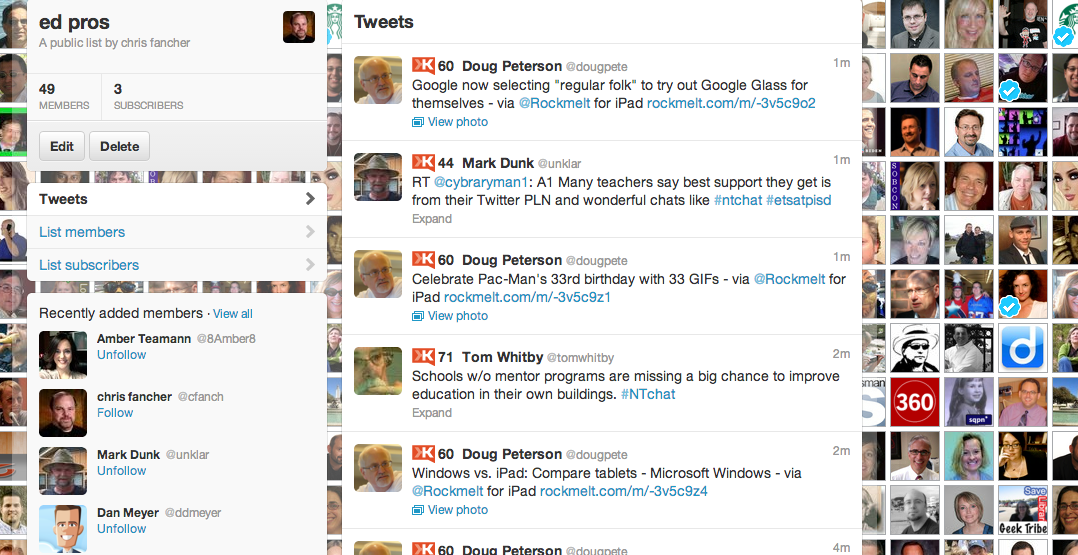 On October 3, 2007 I opened my Twitter account. My wife had been on for a while (since it was introduced to the public the Spring before at the SXSW conference).

If you go onto Twitter and look me up (@cfanch ) you’ll see that I have one list of people to follow: Edpros.  Most of the people on that list were in my original group of people I followed or who followed me and a majority of those names have been on Twitter in excess of 5 years now.

These educators were my original PLN (Professional Learning Network) before we used the term on twitter. I can still count on them to provide great insight into all things education and when I need an answer to a tough question I will send it their way.

During the years from 2008 to now, I have tried to get teachers, who I work with, to get onto Twitter so that they can glean knowledge from educational experts. At Manor New Technology High School I was totally unsuccessful.  I stopped trying and would just send links of great blog posts I had read because of my friends on Twitter. Or I would share a tech secret that I had learned about because of people sharing stuff on Twitter. But, as far as active users, I (again) was totally unsuccessful at showing them why it was a must to be connected to a PLN.

Now I am at a new school where the number of tech savvy teachers is at a minimum. Those that are good with technology are doing really great things. But there really is only one teacher (out of about 50) who are active on Twitter for professional reasons and a couple who have Twitter accounts but don’t understand how to use them to help their teaching skills.

I have given up (or at least I think I’ve given up) on encouraging teachers to try Twitter.  I am sharing blog posts, occasionally, with my fellow teachers at school but I rarely mention that I found the post on Twitter. And, to be quite frank, I have gotten pretty darn bitter about not being able to share information with anybody I work with.

This leads to today and an exchange I had with a wonderful person I met on Twitter a few months ago and was able to say hello to at an Edcamp in Waller Texas. {Don’t even get me started on getting teachers to go to Edcamps. I ran my own Edcamp 2 years ago that about 25 people came to and only one of them was from my school or school district.}

There was a time when I was always on Twitter – sharing things, having great times with my PLN buddies, learning things.  Now I get on occasionally but I feel like an outsider and not in on all of the jokes and innuendo.  And so I noticed a group of people talking about creating a Twitter for Educators panel for next year’s TCEA conference.  Everyone on the list in the tweets is connected, doing great things with education, and are forward lookers in all things new and cool in education. I feel that that’s where I was 3 or 4 years ago.

And so I said, ” @RafranzDavis After 5 + years on here, if they havent’ figured it out they won’t ever figure it out (Twitter for PD), #mrnegative ” And I meant it.  Why even try to get people interested in this stuff they’ll just ignore you and laugh and call you “Mr. Twitter.” But Rafranz didn’t give up.  She replied ” @cfanch which is why this “super panel” is needed !!!:) ” She continued ” @cfanch all that we can do is show how we use it. We can”t force people into changing how they learn best. However, we can’t stop trying 🙂 “

She’s right of course. I just wonder if I have the energy to keep up the fight.  At this Edcamp I heard teachers asking all kinds of questions about how to get onto twitter and how to use it. Part of me wanted to yell “Where have you all been?” But I smiled and helped people get through the beginning steps of getting connected.

Even though I knew everyone of those people she was talking with about the “Super Panel” for TCEA, I don’t feel connected to them. Maybe I need to get back on Twitter and connect with them so I can feel like I’m a part of a PLN again. Because you’re never really NOT a part of a PLN.