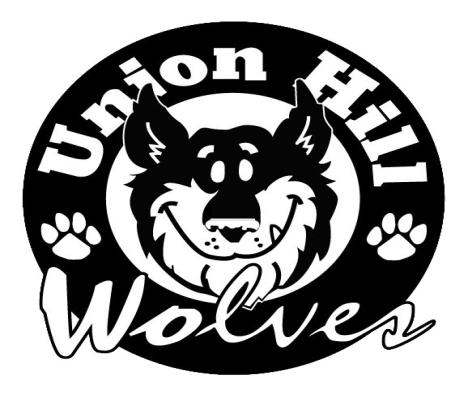 Today I was able to attend my son’s elementary school, Union Hill Elementary.  I was a Watch Dog.  If you haven’t heard of the Watch Dog program it’s a way to get dads more involved with the schools.  So there I was, at 7:25(on my day off), greeting students with a “only 2 days this week” or “you look ready for school, give me five,” and the day began.
First stop, the Broadcast booth to be introduced to the school.  They have a really cool setup for the broadcast and there are 3 awesome teachers in there with,(what seemed like), 25 kids who are all over the place: running video, behind cameras, in front of cameras, helping with script boards, running teleprompters, and making sure Watch Dogs know where to sit and what to say.  We rehearsed once through and I said my lines perfectly: My Name is ____________ My Child’s Name is _________from Mr./Mrs ________________class.  An additional cool factor was my son being the anchor today.  So when we did it for real he could say “Thanks Dad” instead of Thank you watch dog(s).
After the broadcast I was able to spend about an hour with my son’s class.  I even got to participate in a fire drill!  After being a high school teacher forever let’s just say that 5th grade teachers are incredibly patient and I think, if left by myself, I might have killed a couple of them there youngsters.  I kept thinking, “how does he (the teacher) do this every day?”  So when it was my time to rotate to another class I asked where I needed to go and he looked at my schedule and he said,”Oh, Pre-K, I taught that level for 2 years.”  Pre-K?  Are you kidding me?  There must be some kind of mistake.
I arrived at the pre-K door and a very calm young lady was seated near the door helping 2 students spell a word.  Most of the other students were seated at tables gluing pictures of pumpkins.  The teacher told me that I should help the students, as needed, and make sure they put the pictures in the window to dry and that they clean up before going to “centers.”  I’ve been in education long enough to know that centers are where kids work on different topics at various places in the room.  So, when do the other adults come in?
It may only be 7 hours since I walked into that room but I learned that angels are, in fact, walking the face of this Earth.  And they are called Pre-school teachers.  Oh My God!!!  I would need 2 more blog posts to describe what went on during the next 20 minutes.  Suffice it to say this teacher never, not once, raised her voice (or fired off a 45).  And when I left her she was smiling and waving good bye to those “little darlings.”  I was waving too and wondering, “do they come back?”
Next stop – the lunch room.  I was able to experience little people eating, en masse, with little regard to hygiene or common sense.  I opened Gogurts, milk cartons, granola bars, and bags of chips.  I handed out ketchup packets and spoons.  And, I used a LOT of hand sanitizer.
I did get my revenge a little in that I taught one table of first graders the game “Pig Poop On Your Head.”  This was a game my son brought home in first grade from this very school.  The object of the game is to say, “wait a minute, don’t move there’s a pig on your head.”  Then the person with the pig on his head reaches up slowly and says “what’s it doing?” The other person says “it’s pooping on your head.”  You then wipe the back of your head, say “oooohhh…” and pretend to wipe it on the original person.  Now it’s your turn to start it and you can pick any organism you want and it doesn’t have to be pooping.  It could be a T-Rex about to bite you.  It could be a TV about to electrocute you.  Just roll with it.  Did I mention the teachers and lunchroom monitor at this school are awesome!
After monitoring a quiet recess I was able to go to the quiet library and I put stickers on books.  After that I went to the Reading Lab and I helped cut up things that had been laminated.  Then it was off to a 2nd grade class where 3 students took turns reading me a book about penguins.
At every stop along the way I saw (mostly) happy nurturing teachers and other adults.  Sure there were teachers handling difficult discipline issues.  Yes, there were students doing things they shouldn’t be doing.  But I was impressed by the professional atmosphere I witnessed today.  And, it was evident why this school has received the Texas rating of Exemplary Campus.  Thank you for a great day – now I need a nap.