December 16, 2016. That’s the date on this draft post I was thinking about writing. It is another of my 10 “draft” posts I have on my blog. I’m about to shift this blog over to WordPress and away from Blogger. I have 276 blog posts altogether. Most were written over a 4 year period when I was actively writing (2011 through 2015).

There are many things to consider if you are thinking about doing an interdisciplinary project. The following project was created for 7th grade students at a K-12 charter school in Round Rock Texas. The project included the subjects of Theater Arts, Language (French and Spanish), and IB Design.

The most obvious thing to say about the project design process, with multiple subjects, is that there has to be an initial conversation between 2 or 3 (or more) teachers who want to work together. At this school that conversation happened between the theater teacher and the design teacher a few months prior to project launch.

The theater teacher wanted to do a puppet show “towards the end of the year.” That initial discussion concentrated on how the design students would be involved. Could they build scenery, or props, or puppets for the show?  The decision was made to have the design students build the puppets. During this discussion came the idea that, maybe, the language classes could be involved. All of the 7th grade students, at this school, take either French or Spanish (and it is nearly a 50/50 split). The language teachers were approached with the project idea and they were excited to be a part of it.

In one day the theater and design teachers had gone from a simple conversation to a commitment by 5 teachers. The next step was to create a rough calendar. To properly do backward design the teachers had to start with the furthest item out. Scheduling the puppet show would drive the other dates. The puppet show date led to establishing when the puppets would have to be completed. Since the students would be reading stories in their language classes and the stories, in turn, would become the basis for a script, when to start reading the stories had to be entered into the equation.

Those first steps were items that each teacher had to negotiate so that the overall project was successful. Individually, the teachers had to plan their classes so that their part of the process was completed on time with success. For example, the Design teacher wanted time to build empathy and time to start the inquiry process. It was decided that the project entry event would happen in the design class. The design teacher created a problem statement and specific product do-dates for the building of the puppets.

The theater and design teachers decided that the students would all create the same type of puppet so that they could help each other. An interesting and common (for interdisciplinary projects) issue came to light at this stage: The students who were together in design were not all together in their theater classes. And, the language classes were different from design or theater. This was important because the groups in theater class, who were presenting a specific story, all took the same language. But that didn’t mean they were in the same language class period. And when it came time for building puppets none of them might be in the same design class period. It must be said that this was not a deal killer – a minor headache? Yes A stop the presses moment? Definitely not. 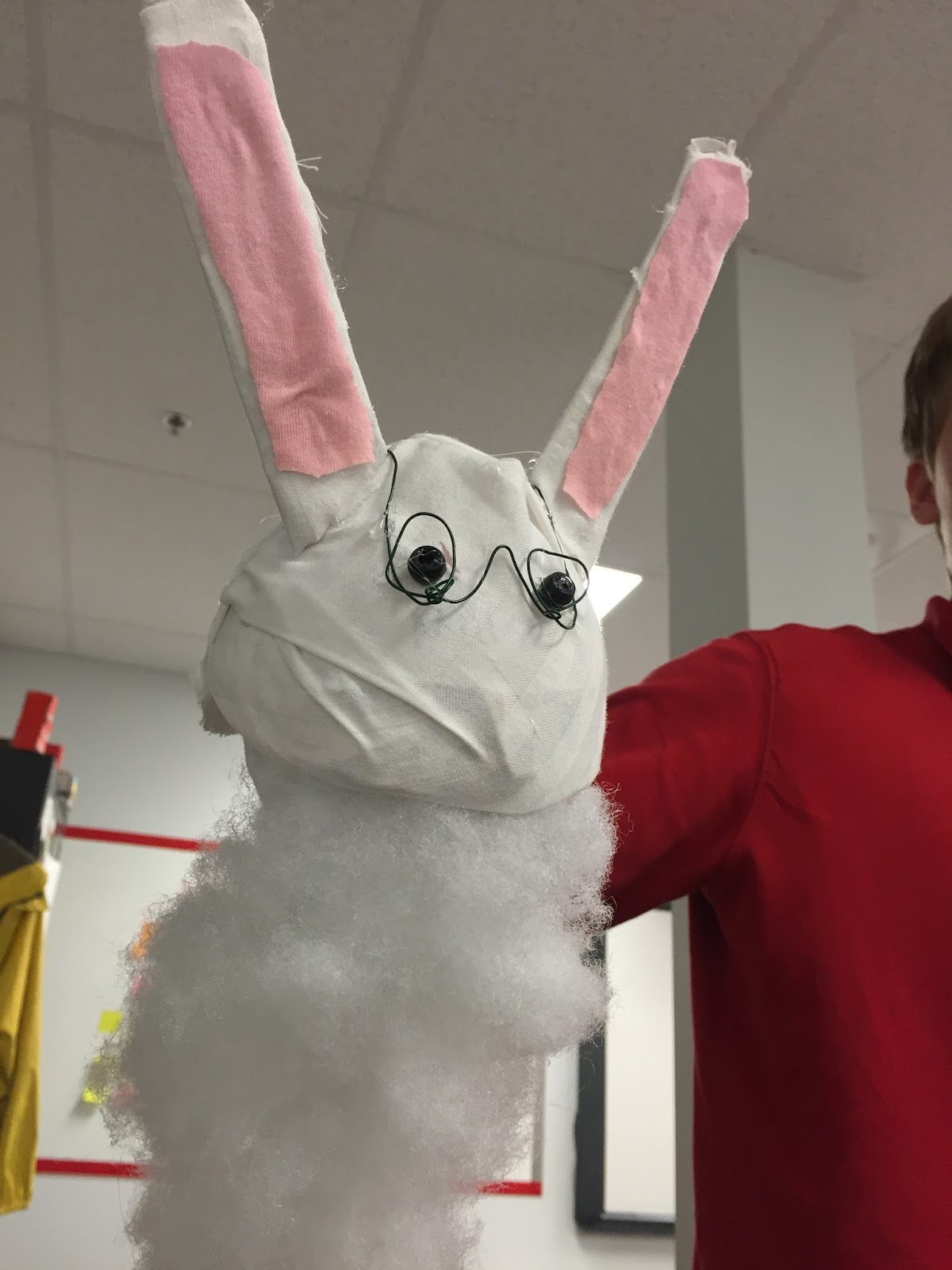 So, how do you drive a project that kicks off in a design class; forces students to ask their language teachers for story or poem suggestions that they can read; and ends up with scripts being written in theater so that a puppet show can happen? The answer is actually pretty simple. Once teachers have due dates on the calendar you can let the students dictate the course of the project.

In this project students arrived in their design class and were given the task of building puppets for a puppet show in their theater class. In theater class they were told that they were going to be having a puppet show where they would be writing scripts based upon either French or Spanish children’s stories that they would read in their language classes. And, finally, the students were told by their language teachers that they would be selecting children’s stories to read that would be used for a puppet show in theater. The time it took for all students to get an understanding of the overall scheme of the project took less than a week.

As far as deep understanding this project worked well for sustainable inquiry. Many of the students were with a group of students creating a puppet show in their theater class, but never were in class with their group members again during the day. But puppets representing each character had to be built. Scripts had to be written based upon a story that each group member was reading and, since they weren’t in the same language class, they had to trust that their group members were all at a point where they understood the story well enough to have input for the script they were writing. 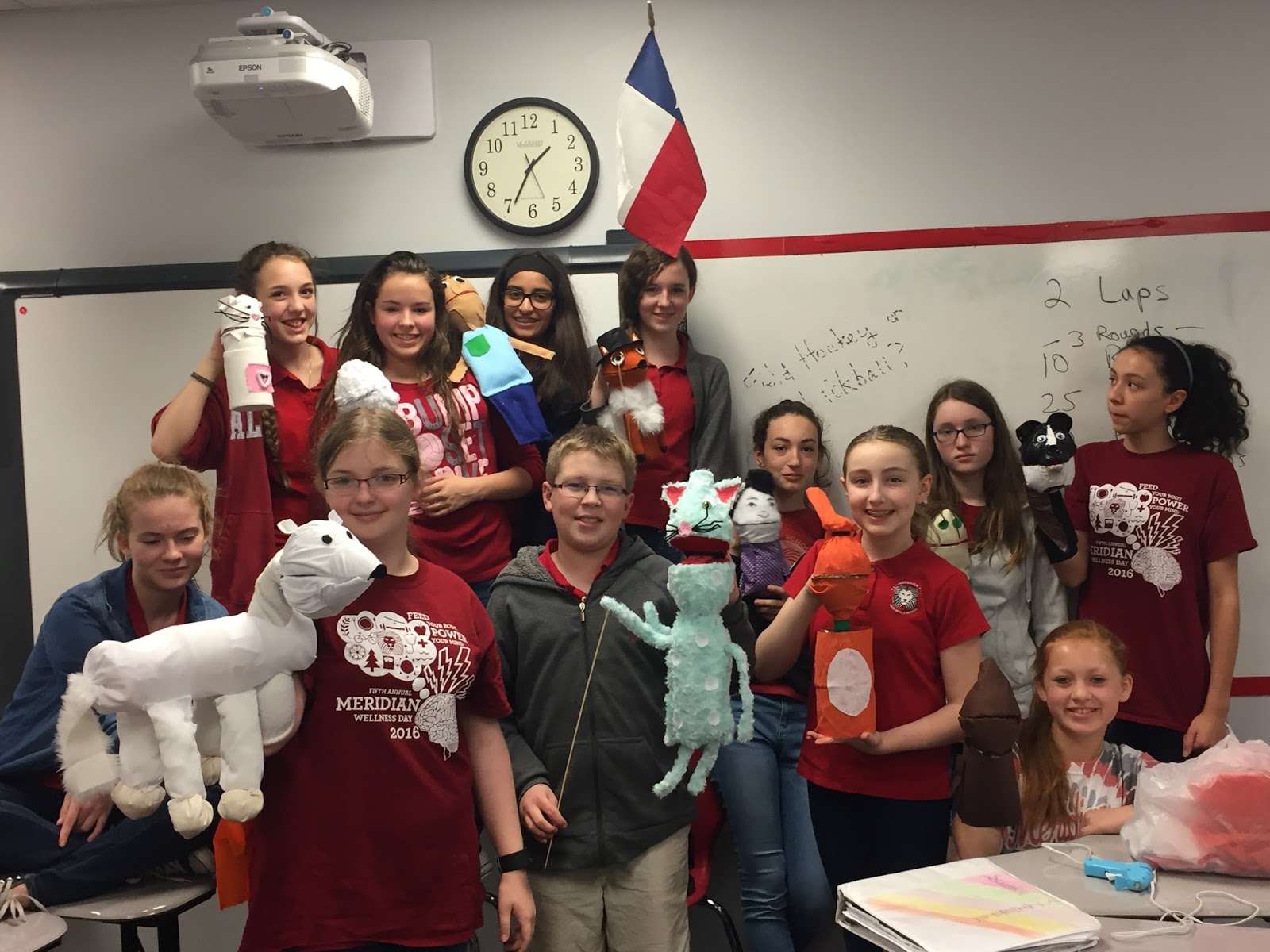 Students rose to the occasion. They learned about puppetry from areas all over the globe. They read for understanding in their language classes and discussed the nuances of the characters in their stories. They wrote scripts and made puppets that truly reflected the character they were in their story. And, in the end, had a fun time performing puppet shows.
Tagged design_processedublogseducationlanguagePBLProject_BasedProjectsstemtheatertheater_arts